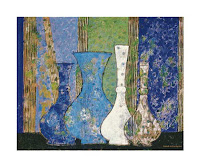 Finally, the secret is out! As some of you know, for the last several months I worked mainly on a "secret" needlepoint that was intended as a gift for a friend. Well, now the gift has been received and loved, so I can post the progress pictures and notes. First, is the inspiration painting, Vases Blues I by Isabelle Borchgrave. Next is Progress Photo #1.

First I charted the outlines and chose my colors (based on my friend's newly redecorated bedroom). I picked my stitches as I went along. The wallpaper patterns are all from an old book I have called "Patterned Backgrounds for Needlepoint", but I used overdyes which gives them a very different look. The columns in the background are an encroaching gobelin. I used straight stitches & textured stitches for the vases to bring them forward. The tabletop in navy I used Alternating Scotch so that it would work up quickly and not overwhelm the vases. I used all floss and metallics and the canvas is a soft sage green.

I think it turned out pretty good! And I got it done in time for xmas! Following is Progress Photo #2, #3, and the finished piece. 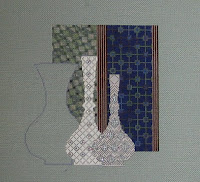 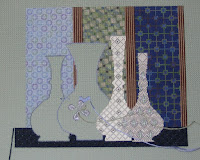 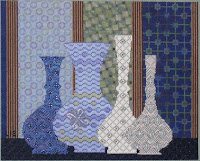 I'd love to have a friend like you! Your vases piece is just beautiful! So, too, is your work in the recent issue of Needlepoint Now. Got my copy on Saturday and finally sat down to read it today. Your Bargello is amazing--lovely work!

This is really pretty - well done on the textured stitches! There are lots but they are orderly and don't overwhelm the design. Beautiful colors.

What a beautiful piece! I love the wallpapers as well as the vases....can't wait to see the next NNow!

Well isn't this a lovely piece and most generous gift. Lucky friend. Your stitching is picture perfect too! Thanks for sharing this wonderful needle rendition of a beautiful painting.

I enjoyed your article in NN and I'm looking forward to the next one. I've been in love with Bargello for over 30 years and it's wonderful to see it come back into fashion. :-)

Your blog is one of the best. Your pictures are work of arts -- let alone all the projects. I like so many of them, but especially love the vases.......you must get everyone to want to have you as a friend so you will stitch something to give to them...........am surprised that you got some of my charts, they do not seem to be the type of project you work on.........Patt