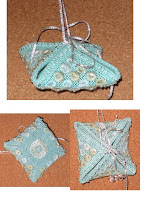 I have been working on these little ornaments. They were originally Christmas Ornaments by Suzanne Olson. Suzanne graciously granted me permission to work some up for a retreat freebie that will be held here in Vegas in the Spring. This is the first one. They work up quickly and are pretty. A "dangle" can be hung from the bottom if desired. I'm going to work up at least one more, in a different colorway.
Posted by LIZ at 11:07 AM 1 comment: 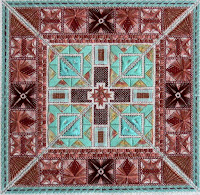 Hooray! Suzy Q is finished. The pic was taken without flash, so the sparkle doesn't detract, but it also doesn't show up much. There is quite a lot of metallic, trust me! Refer to previous progress photos and I think you can tell the difference! I filled in the outer green border & the small inner brown border so there is no "break" at their centers. And I backstitched around the brown square motifs with brown silk instead of metallic, then added cross stitching (over 2) around & between them. I think this works to reduce the amount of open canvas without making its own statement! On this piece I didn't care for the open canvas. I think because my threads are so dark. If the canvas had been a darker color, the open canvas may have been fine. At any rate, it is finished. Suzy Q is a fun piece with lots of unusual stitch motifs to challenge just about any level of stitcher.
Posted by LIZ at 10:03 AM 5 comments: 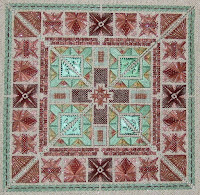 SuzyQ is nearly done! I finished the outer border yesterday and put in the diagonal strip, Neon Rays couched with #4 Kreinik. I have started outlining each area with back stitches in #4 Kreinik. Once that is done, the piece will be finished according to Ro's instructions. But I'm thinking that I might want to fill in around the large brown stitch patterns, maybe with cross stitch? Comments anyone?
Posted by LIZ at 9:12 AM 1 comment: 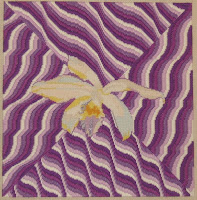 For those of you who have been following this Blog for awhile, you may remember the White Orchid with the Bargello background. Well, it is finished, but I'm not happy with it. The colors in the orchid are too pale and there isn't enough definition. It actually looks better in the photo than it does in real life! I also messed up on the counts in several places, so the finished piece doesn't really match the charted design. This wouldn't matter except that I had planned for this to be a published design that others need to be able to follow! Unless I can "fix" it, it will not be published. I will play around with some outlining and maybe some decorative stitches to try to fix it, but I'm not holding my breath!

Unfortunately, not every design is a winner! Sometimes it just doesn't work out. The design may be bad, the threads and/or colors may be wrong, the stitch patterns may be unfortunate. But we can learn from our mistakes. Accepting failure is as important as enjoying success, just not as much fun!

I will go ahead and stitch the Black Orchid next, as planned. I will study the colors more though, before I start. And I will make a serious effort to COUNT CORRECTLY!!!!! I will edit & correct the charts as I go along. Eventually, at least the Vanilla Orchid (finished last year) will become a published design. We'll have to see about the black & white ones!
Posted by LIZ at 6:00 AM 3 comments: 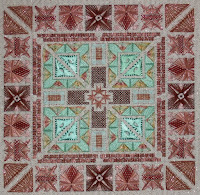 I finally finished another band on Ro Pace's Suzy Q. This band includes 4 different stitch patterns. They all require careful counting! I used a dark brown silk, an overdyed floss, a light brown wool and Kreinik metallic. The next band should go faster and then there is just a filler stitch for the diagonals and it's done! Unless I decide to fill in more areas. Oh, and the different areas are supposed to be outlined with backstitches, but I haven't decided if I'm going to do that or not.
Posted by LIZ at 8:42 AM 1 comment: 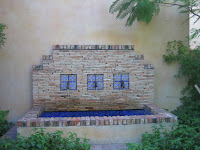 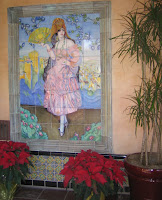 Here I am, back in Las Vegas. It is good to be home. We had a very busy holiday in Reno and I didn't get nearly as much stitching done as I'd hoped!

This past weekend we spent at an Intel conference in Phoenix. The conference was held at the Royal Palms Hotel near Scottsdale. The hotel is old, but completely modernized and updated. It is a wonderful facility. It was quite the place to be in the 50s and was frequented by lots of famous people. Now it is a charming place with meandering walks, charming little hideaways, lovely rooms, and lots of wonderful tile work left over from the "old" days. I only used the restaurant for breakfast as the conference included lunches & dinners, but the breakfast was outstanding. The conference meals were catered by the hotel and were spectacular, certainly NOT banquet fare!

The above pictures show just some of the lovely tilework around the property. The Spanish Lady is so beautiful and she is on a wall near the entrance to the restaurant. She is quite large, at least 4'x8'.

The "oriental rug" is the floor just outside the registration area. I had a hard time getting a good photo because the sun was shining in. Notice there is even "fringe" on the edge tiles.

The other 2 photos are of a lovely fountain that is just in a corner along a walkway and another in a secluded little sitting area.
Posted by LIZ at 5:22 PM No comments:

I wish all of you a happy, prosperous and stitch-filled 2010!

Can you believe we are already a full decade into the 21st Century? And can you believe the amazing technological progress the needlework community has made? Ten years ago I'd never heard of a Blog, did they exist then? Or Face Book or Twitter? Or books on my phone for easy reference? It just goes on and on. I love it all!

In case you have been wondering, I will not be offering any new patterns on my Blog. I am working on getting my website up & running by early February. At that time, I will offer several new patterns, both needlepoint and Bargello. This will be very exciting for me and I hope for all my faithful followers! So stay tuned, keep checking here for further news.

In the meantime, I will try to keep you up-to-date on my stitching progress. As you know, I have multiple projects going at once!