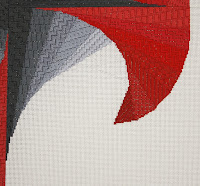 The next time you see this Twister, it will be finished!  I have been working on it most Sundays, although I missed several Sundays over the holidays.  This quadrant seems to be going very slowly, but I think it just seems that way because I want it to be finished!  First I wanted it done by the end of 2011, then I thought by the end of January, now I'll be pleased if it is finished by the end of February!  Life does get in the way sometimes. 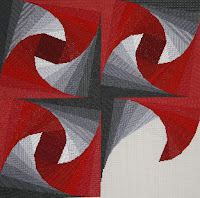 Here's what the whole thing looks like now:
It is beginning to look kinda cool!﻿
Posted by LIZ at 4:00 AM 2 comments: 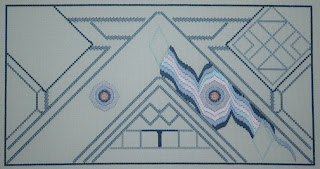 For some time now I have been working on a pilot for Ro Pace, Atlantis Rising.  Ro will be teaching this piece at Seminar this year.  She has given me permission now to post about it.  I will go back in time & show you the progress photos, one at a time!  Hopefully to keep you interested & enthusiastic about taking this class!  It is a large and very challenging piece!
This is progress photo #1.  The prework is completed and the first section (mostly Bargello) is begun.  Ro allowed her pilot stitchers to change colors and I changed them slightly, but not significantly.  The main changes I made was to use 18-count aquamarine canvas, rather than white or off-white congress cloth and from a kind of rosy color that Ro used for contrast, to a copper.
This piece has a lot of Bargello, you can see from the photo I think the large section of Bargello I have begun.  Then there are many other stitches used in all the other sections, which are fun to explore and will result in an exciting piece!
Stay tuned, I'll post another photo next week.
Posted by LIZ at 12:43 PM 3 comments:

These last two squares seemed to take forever!  Ingred Bergman (the one on the left) had a lot of couching which is very slow going.  And Gary Cooper, on the right, had many layers & changes of color.  But they sure turned out pretty! 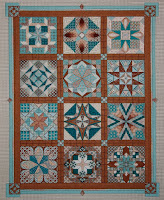 Here is the whole thing finished!  Be sure to check out Jan's as well!  It is so much fun to see all the different color ways.  I have accumulated pix of quite a few and they are all so different.
I haven't decided about the framing yet, but I will probably have a mat cut to fit the outer edge.  It'll be awhile before I get that done.
I am very proud to have completed this beautiful piece.
Posted by LIZ at 4:00 AM 13 comments: 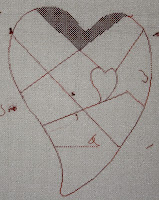 ANG's Stitch of the Month (SOTM) for 2012 has begun and I completed January yesterday.  For once, I have not changed the design or the threads or the colors!  I am using the heart shape and red colorway as first suggested.  Wow, there's a departure!
Anyway, the only thing I have done differently is that I charted the shapes and basted in all of the outlines, well most of the outlines, a few don't quite connect.  I rarely make any marks on my canvas anymore.  I have had too many instances where the marks end up not being in quite the right place and then there's an issue about how to cover them up!
For the first section in T-stitch, I had to remove the basting threads as I went along as there are open areas due to the nature of the stitch and the basting showed.  We'll see how this ends up.  Depending on what the background turns out to be, I may do a whipped backstitch or something around the outside edge.  But that's nearly a year away so we aren't going to worry about it!﻿
Posted by LIZ at 11:22 AM No comments:

Stars For A New Millenium, Progress #12 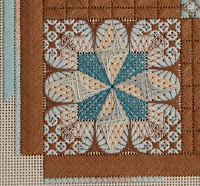 We're on the home stretch now!  Here is the first square in the LAST row of Stars, Humphrey Bogart.  Humphrey went quite quickly and, typically, there was a surprise at the end!  The last things to be stitched were the Spratts Variations in the darkish brown.  They changed the look of the whole square!  That's the sort of thing I love about Tony's designs.
Two more squares & some border to go and it'll be finished.  Be sure to check Jan's  blog for her version. 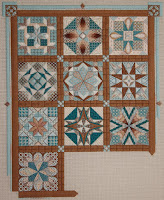 Bitter Springs is a new Bargello.  It was inspired by a day trip DH & I took a year or so ago up into the Muddy Mountains near Las Vegas.  It was spring and the rock formations were all these wonderful colors with lots of green things coming up among them.  We took lots of pictures & I came home & pulled threads!  I posted about this at the time & if you do a search on Bitter Springs, it should come up.

Finally, I have started this project.  What you see is just 1/2 of the piece. The triangle on the right will be repeated on the left in mirror image.  This is a long, narrow piece, the finished size will be about 6" x 17".  I am using Silk & Ivory, Watercolours and FyreWerks.
Posted by LIZ at 4:00 AM 3 comments:

SOTM 2011 is finished and just in the nick of time too since SOTM 2012 has begun!  This is my first finish for 2012, the last stitch went in Monday night.

Since my SOTM is worked on 18-count, I didn't care for the Angel Wings border - it just seemed too delicate for the rest of the design.  Soooooo, I made some changes!

I rescaled the background by adding about two more rows of the little open diamonds (Kreinik #4 Braid, discontinued color #4005) all the way around.  Then I used Diamond Rhodes (over 12) in Waterlilies #180 for the border.

I don't think I'll be doing any finishing of this (framing or whatever) for awhile.  These colors go better in our Reno house, so it'll just get tacked to my wall here in LV for now.﻿
Posted by LIZ at 4:00 AM 2 comments: 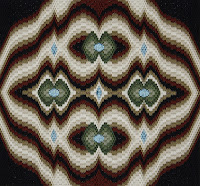 For all intents & purposes, Scottsdale is finished.  This is another Bargello design that I will publish, eventually.

This piece is worked in Silk & Ivory and FyreWerks Soft Sheen.

Now that the stitching is finished and photographed, I will go back to this and replace the metallic centers with beads.  The beads are like cabochons, but they are really beads (with holes) that can be sewn on.  So, this pattern will have two options for finishing the centers.

I hope to have the beaded version to show you before too long.  Then this too goes in the pile to have instructions written!﻿
Posted by LIZ at 4:00 AM 2 comments:

This project is finished!  I have renamed Twisted Ribbons to Metal Ribbons.  For now anyway.  I may change it again before the pattern gets published!  Now it goes in my pile of things that need the instructions written!

I'm very pleased with the way this turned out!  I wasn't sure about the background, but I'm loving it now!

The ribbons are all metallics of one kind or another.  The background is Neon Rays & a Waterlilies overdye.

There will be another finished Bargello to show you tomorrow.
Posted by LIZ at 11:00 AM 4 comments:

How I Spent My Christmas Vacation

As usual, we drove to Reno for the Christmas Holidays.  All the "kids" went with us:  Sarah dog and Sweet Pea & KC cats.  They are very good in the car for that long 8 hour drive.

We did a LOT of socializing, going to many lunches & dinners.  Plus I got to join my old stitch group for 2 Friday Stitch & Lunch events.  The ladies in Reno get together on Friday mornings to stitch & then go to lunch together.  It was a fun time to see some of my Reno stitchy friends!

We had mostly sunny days, but COLD.  No snow, which disappointed DH greatly as he wanted to go skiing!

I did accomplish some stitching, but not as much as I had hoped.  Following are posts about each project.

We drove back to Las Vegas on Saturday, totally ignoring New Years Eve.  In fact, we pretty much ignored New Years Day too!  However, we did take in a movie (the new Sherlock Holmes) yesterday (Monday) since that was a holiday too!

We had a great Holiday and I hope all of you did too.
Posted by LIZ at 10:47 AM No comments:

Happy New Year everyone!  Thank you all so much for visiting my blog on a regular basis and keeping me interested!
And Thank you to all of you who have blogs.  I read many blogs regularly and enjoy them all!  There is so much talent out there it is just awesome!
We are back in Las Vegas now.  The girls were very good on the drive home.  Sarah-dog sleeps all the time & the cats enjoy quite a bit of lap time in the car!  Boy do they get WARM!!!
In the next day or so I will write about the things I've finished & started over our holiday in Reno.﻿
Posted by LIZ at 10:33 AM 2 comments: