Stash Cats is moving right along!  Big cat is mostly done, just have to finish his tail.  This is much harder now.  So far I have only repeated one stitch (Mosaic, used twice), but it is getting hard to pick stitches.  Not only have I already used so many, but the spaces in the tail are pretty small.  I have not had to repeat any threads though!

I have to say that as a stash buster, this is a failure.  Each stripe is not that big and so only uses small amounts of thread.  I don't keep real small amounts, so mostly it just takes a few strands out instead of actually using anything up!  Guess I need to do a LOT more stash buster pieces :-) !! 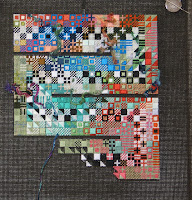 It has been a little over a year since I last posted about this WIP!  But now I am working on it again.  There are 5 sections and I am now working on #4. This is somewhat tedious to work on (I say that a lot lately!) but is going faster now that I decided to try to do all of one color, then go on to the next, rather than work one square at a time!  It is ALL little 5x5 squares.  Sigh.  But I still like it and it will be spectacular when finished & framed!
Posted by LIZ at 10:59 AM 1 comment:

Finally, made it all the way across!  Eight pages finished, 8 to go, but the next 8 are smaller; this piece is a little more than half finished now.  (The center shows near the bottom.)  The bottom is similar to the top, so there is more of the yellow parts and they go quicker than the blue ones.  Still, I doubt it will get finished this year.

PS. I changed the header photo here on blog.  This is what I see out the breakfast nook window, the Spring/Summer version!  There is often a water skier on the lake. It's hard to get going in the morning and not just sit there and watch the birds and the skiers all day!

Stash Cats is moving right along.  The big kitty is well on his way!  He is worked in wools and overdyes (Watercolours) which I have chosen in advance.  Stitches I pick as I go along.  I have discovered quite a few stitches that I don't like and will never use again!!  So far, I have not had to use any stitches twice.
Posted by LIZ at 1:09 PM 2 comments: