Stars For a New Millenium, Progress #7 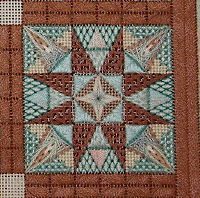 Cary Grant is finished.  I like this one pretty well.  I am just enchanted with Tony's layered stitches.  Each one is a surprise that isn't fully revealed until the stitch is complete.  In this square, I particularly like the long triangles in the corners.   Don't forget to check out Jan's version too!
Here's the whole thing so far.  Oh look, I'm half way there!  I have decided to wait & do all the sashing corners at once at the end. 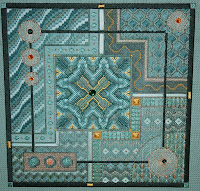 Malachite Maze is finished!  Well, the jewels aren't really fastened on because I don't want to glue them down until after the piece is framed.  So I laid it on a chair & tried to position the jewels for the photo.  As you have probably noticed, they aren't quite straight!  Oh well!  (By the way, the square outline and the border are very dark green, not black).﻿
Posted by LIZ at 4:00 AM 6 comments: 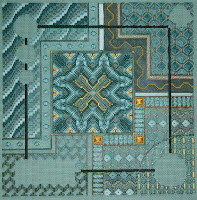 I have gotten quite a lot done on Malachite Maze.  I worked on it a lot while we were in Reno and have kind of been concentrating on it this week.  I'd like to get it done by the end of this month.  I've had a few counting issues (senior moments!), but only one involved ripping!  I found another last night, but it can easily be fixed.  I think I'm going to take out the bright gold Neon Rays in the lower right corner & replace it with gold FyreWerks; the Neon Rays is just too bright!  But, the end is in sight now.  When I finish the lower left corner I will do all the circles, which I think are giant eyelets and then there is a border all the way around.  The end is in sight!﻿
Posted by LIZ at 4:00 AM 2 comments: 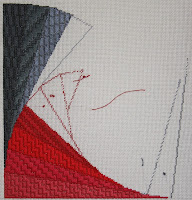 Got back to Twister Sunday this week!  Accomplished quite a bit, 3 sections of the gray and 4 sections of the red are done now.  Next week I'm going to have to do a bunch more basting.  I'm finding that on a non-basting Sunday, I can get 3-4 sections done in a day.  Not bad!!!  I'm still hoping to complete this by the end of the year, but that might be wishful thinking!  Here's what it looks like so far:
﻿ 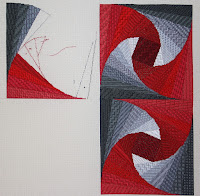 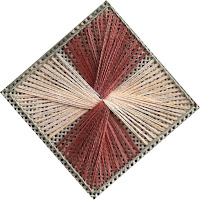 Here is my SOTM for September - the Double Fan Doubled.  This is a stitch that I have done before & always grit my teeth to do it!  I agree with many other posts about it that it is easier if you put a pin in the center to "wrap around", at least till you get a good start on it.  My threads for this are Needle Necessities 125 and ThreadWorx 10311.﻿
Posted by LIZ at 1:54 PM No comments: 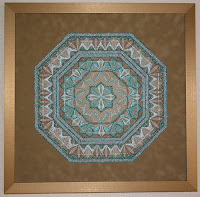 Mediterranean Tile is finally framed.  I decided to just go with a very simple mat & frame so that the "tile" would really stand out.  The mat is a tan suede and the frame is a simple goldish-coppery metal.
This is a Ro Pace design & I hope she will like it (she hasn't seen it yet).﻿
Posted by LIZ at 4:00 PM 4 comments: 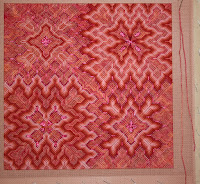 Four Way 4-Way, Summer, is finished!  Thanks to a loyal follower who sent me the remains of the Watercolour that I ran out of, in the correct dye lot!  At the end, I had about 20" of that thread left!  Whew!
The upper right and lower left quarters are identical, except the color sequence is reversed.  The other 2 quarters are identical except for the color sequence changes.  It still amazes me how much those little things can change something!
the very center of the piece is just filled with Watercolour following the pattern as it developed to that point.  I wanted the four quarters to be focal, not the center.﻿
Posted by LIZ at 2:27 PM 2 comments:

Stars For a New Millenium, Progress #6 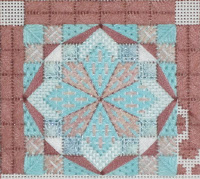 Eva Marie Saint is finished.  This is my least favorite square so far.  When it was finished, I though it looked really bland & blah, so I added some backstitching in copper metallic along the lines of the center "star".  That helped a little.  I didn't quite finish the sashing around it.  These pictures aren't as good as usual cause I didn't bring the "good" camera along to Reno.  I just have the old little one & it sure doesn't take as good pictures!

Anyway, here is progress so far:

Be sure to look at Jan's progress as well.  It is so fun to see the differences!
Posted by LIZ at 4:00 AM 1 comment: 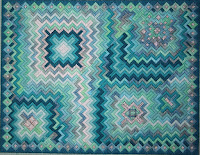 Here is the completed Aqua/Silver Mad Miters.  I had a lot of fun stitching this model and really like it!  Confession time:  I actually stitched this some time ago but couldn't show it to you until the ANG CyberPointers Chapter announced the workshop.  It is listed now on their website along with other upcoming workshops.  They are announcing workshops quite far ahead now so that you can plan your time & expenses!﻿  Registration for Mad Miters doesn't begin until April 2012.
I will have more models to show you later on!  This is only one of many possibilities for this class.
Posted by LIZ at 4:00 AM 4 comments: 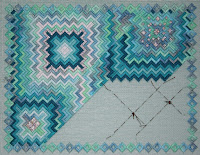 Lot's of progress on this Mad Miters model.  Three sections are complete!  I am having a lot of fun with the "centers", deciding how to stitch them and making each one different.  I particularly like the sort of random-looking one at the upper right.  Stay tuned for the finished model in a couple of days!
Posted by LIZ at 4:00 AM 2 comments: 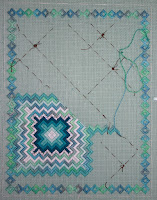 Here is the beginning of a new model for Mad Miters.  The border is started and the first section is nearly complete.  This uses an overdye (Watercolours), a metallic and several shades of Silk & Ivory.  Mad Miters will be an online workshop for the Cyberpointers Chapter of ANG next year.﻿
Posted by LIZ at 4:00 AM 1 comment:

I have been working on Malachite Maze even though I haven't shown it to you for awhile.  It is a fun project!
However, Sunday night the fun stopped when I discovered I had made a counting error in the narrow band around the left side of the center section!  I was stitching away on the Bargello & realized that I was ONE THREAD short at the bottom!  I considered a "redesign" but decided against it as that one thread off will throw off the whole rest of the piece!  So, I took out the bad part & will redo it as soon as I get another chance to work on it.﻿
Posted by LIZ at 4:00 AM No comments: