ANG's Stitch-of-the-Month (SOTM) for 2011 is well underway.  This year's project is designed by Ro Pace and will include Hilton type stitches.  Here are my threads: 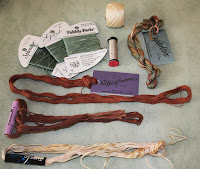 You can't tell by the picture very well, but my canvas is the overdyed, green on green.  I love the soft sage-y green. 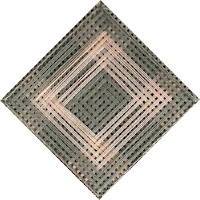 I have completed Jan & Feb, here is my Waffle: 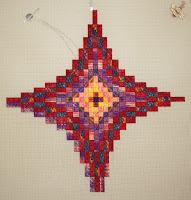 I have occasionally been working on Tuscan Midnight.  It is soothing to work on after spending most of my time lately on "secret" works that are in the middle of design process.  Anyway, a few days ago I completed the last all-the-way-around row, the red one.  Oh boy!  I would be able to start filling in the corners!  I went to a Stitch-In on Saturday and thought this would be the perfect piece to take.  Well, I guess there was too much going on to begin the new section!  Not only is it in the wrong corner, it is 90 degrees "off".  After some study, I have decided it will take less time to rip it out and do it right than to "adjust" all the other corners!  Oh well, that'll be good TV watching work!
Posted by LIZ at 7:00 AM 2 comments: 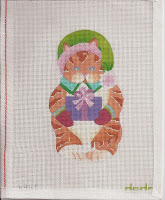 Last summer I purchased 3 Dede Ogden kitty canvases.  They were such a deal, I couldn't pass them up - from Canvases Begone.  On the left, you can see canvas #1, the yellow striped kitty.  I decided to stitch him for a friend who has a yellow striped kitty named Milo.  I tried to use as much Stash as possible for Milo.  I think the only thread I bought was the Rainbow Gallery Alpaca 18 and Fuzzy Stuff, all for the fur.  From Stash, I found Kreiniks, Crystal Braid, Neon Rays, Fyre Werks, Silk Lame Braid, Cashmere & Silk n Cream.  I used some Pink Angora for the trim on the hat & it brushed up nicely.

Here is Milo all finished.  I used a variety of stitches.  His hat is Neon Rays and beads in Criss Cross Hungarian with the pink fuzzy trim in random straight stiches.  I used a kind of overlapping gobelin for the furr.  It is quite random and works well.  I have used this method for furry stuff before and like the way it turns out.  Let see, what else did I use?
The package is a Framed Mosaic.  There's a few other patterns, but I forget what they are.
This is one of the very few painted canvases I have done in many years.  I think I can get better!


I decided to have Milo finished as a Stand Up, so I worked some background around him.  I think I should have used a lighter color, or a more contrasting one.  The background color is too close to his fur color & so he doesn't show up quite as much as I'd like.  I'll remember that for the next one!  Milo has now been delivered to his Forever Home and I have heard that one of the "real" Milo's brothers thinks this is his toy!  Here is Milo all done & standing up:

Thank you all for submitting your ideas to name my newest Retreat Project.  All of your suggestions were great!
I have decided to go with "Spring Break", which was suggested by melisabchris.
Melissa, if you will email me, I will send you the pattern!  Email me at lizboatay at hotmail dot com.


Now, back to work!  I hope to have something to show you soon.  I've been working on *secret* projects that I can't show you for awhile.  But I have done some work on Tuscan Midnight and I'll show you that in a day or so.

Another Retreat Project - Needs a Name!

I have a request:  The retreat project (see yesterday's post) needs a name.
I have called it Lacy Box Top in the past, but I really don't want it tied to being a box.
I intend to add other colorways, so probably don't want the color in the name.
Any and all ideas will be considered!  Write it as a comment or email me (use "email" under My Profile).
If I use your suggestion, I will email you a pdf of the pattern.
Posted by LIZ at 9:42 AM 10 comments: 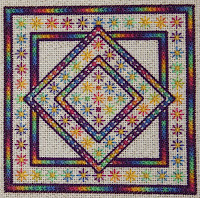 The needlepoint freebie for this spring's retreat is finished!  Now to get the instructions written so the kits can be put up.  The retreat isn't until April, so there's no real rush, but I still want to get it done quickly.  I hope everyone will like this cheerful project!
After retreat I'll get it ready with additional colorways and add the pattern to my website.
Posted by LIZ at 1:27 PM 2 comments: 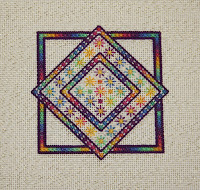 This small piece will hopefully be done by the end of the week.  There is nother row of flowers all the way around & then another border.  It is quite a cheerful piece to work on, and doesn't tax one's brain too much!  I used a full 6 strands of floss for the purple outline & while that worked fine for the slanted (backstitched) lines, it seems too heavy for the Continental lines.  I think I'll cut that down to 4 strands for the next one.
Posted by LIZ at 4:00 AM 5 comments: 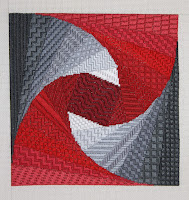 Sunday I finished the first Quadrant of Twister.  Whew!  I have decided that for the next quadrant, I will outline all of the areas first.  That takes quite a bit of time but once the outlines are in, the little sections stitch up much more quickly.  I'm sure it will take the same amount of time all together, but it seems faster!  I outline with just 1 strand of floss in the color of that section.  Then I can just stitch right over the outline.
Posted by LIZ at 4:00 AM 1 comment: