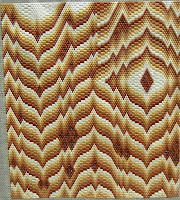 The first Crystal Caves, Topaz, is finished! Actually I finished it last week the night before we left for Reno, but this is the first chance I've had to get a pic of it and do a post. I'm pleased with the way it turned out, but the Kreinik Holographic Ribbon I used doesn't show up well in the photos. I'll have to find out how to photograph it. This pic was taken in a sunny spot, sun coming in the window.

Something I learned: Once I completed the stitching all the way across, I was surprised that it seemed to come much to close to the frame. There should have been plenty of room. I measured again and the canvas was cut the correct size. Hmmmm. Then I thought, check the gauge of the canvas. Well! This piece of brown Zweigart canvas counted 18 stitches/inch acrosss & 17 down! Unfortunately I had used it the "wrong" way, with the selvage at the bottom, because that is the piece I had available. The moral to this story is that the vertical thread count may not be the same as the horizontal thread count. I checked several other pieces of canvas in my stash and they were all either spot on or only off by less than a thread. This brown canvas may have been an old piece I had. I think today's canvas is more accurate than it was 30 years ago! Anyway, from now on I will check the canvas thread count, in both directions, before I cut it!
Posted by LIZ at 10:32 AM

This turned out nicely! And I'm sure the Kreinik shines beautifully in person. Will you be stitching this again in another color scheme?

Liz, I've never been able to photograph metallics successfully. The header of Blog does show how the red and purple holographic Kreinik I used on the mermaid shines but that is about as good as it gets. Try a scanner for detail but the shine of silk reflection and of metallics is something a camera just does not seen, no mater how bright or dark the light source.

Jane, the failed photographer of CH

It's difficult to show the "twinkle" of the Holographic metallic - it looks like it has little lights within it. I have to turn my Daylight lamp different ways to show the shine of metallics, and always also have the table by a window for photographing them, and it works fine - except for the Holographics.