In 1974 we moved from Southern California to Boston, Mass.  Talk about culture shock!!  Anyway, the big benefit for me was that I didn’t have to work and could devote most of my time to needlepoint!  A lot happened during those two years to further my needlepoint education and “career”.  This period will take more than one installment!


I guess the first thing was that I discovered Maggie Lane.  Oh my!  I eventually acquired all of her books and still have them.  I started with a fairly simple design and moved right on.  Pictured are the 2nd & 3rd projects.  The rocking chair was stitched on a large mesh canvas with rug yarn. 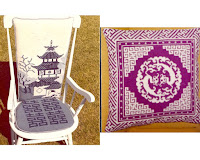 I also discovered a real needlework store and learned about printed vs painted canvas and about Paternayan yarn, among other things.  I stuck with charts though!  Since I was charting everything I saw, my husband suggested I do a book.  Well, I didn’t get up the nerve for that right away, but I did discover Needlepoint News and submitted some designs.  I was published!  Eventually I began working for that magazine.  Many designs were received from readers that were not in publishable condition.  My job was to rechart them for publication.  By hand.  In ink.  Remember, this was pre-computer days!!  I loved it.  Many of my designs were used as well and I worked for NN until its demise in the 80s. 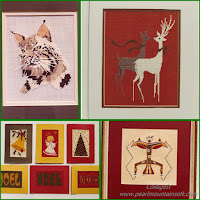 Thanks to Needlepoint News I also discovered (from ads) perforated paper and the American Needlepoint Guild (ANG).  I went kind of nuts with the perf. paper for a while!  Christmas cards & ornaments & framed pictures were gifts that year.  I painted the paper as at that time it was only available in tan. I think most of the stitching was with floss, in Continental stitch, with the occasional bit of metallic thread.  Some of the designs I created for the paper were later published and a few are on my website today.

I joined ANG in ’74 or ’75 as a Member-at-large.  I don’t remember if there was a chapter in the Boston area, but if there was I didn’t join.  I entered a piece in the 1975 exhibit, which was in Monaco!  It was an antelope stitched on perforated paper.  It won a blue ribbon!!!!  I was totally surprised and thrilled!

I also stitched a square for the UN Peace Rug.  The stitching was done in 1974 and the finished rug was presented to the United Nations by Mary Martin in New York, October 23, 1975. 138 squares were hand painted, on 16-mesh canvas, with the coats of arms of the member nations and stitched in Basketweave by members of ANG, I stitched Nepal.  There was also a larger center square with the UN emblem and a dedication in a rectangular piece, all stitched.  A limited edition book was published, which I have, with full page color prints of each square.  I have also saved a lot of the documentation, including an invitation to the presentation (I was unable to attend).  I am very proud to have been part of this project.

The photo of the stitched square is very washed out.  This is a scan of an old snapshot.  The background is actually a soft yellow and all of the colors are quite vivid.

I had no idea, liz! You were certainly driven by your passion in these years. And I love your award-winning antelope!

Wow, did not know about the UN rug. Is it still in use?

Brenda, I assume that it is, but I don't really know.

Liz, I am loving your history. Not only is your own story wonderful to read, you've also brought to life an important chapter in needlepoint history. I hope, when you've finished it, you will collect your various writings and submit them so they can become part of a needlepoint archive. I don't know if ANG is in a position to host such an archive, but it seems like a natural undertaking. Thanks so much for taking the time to tell your story. Best wishes, Robin

To learn of this history is wonderful and exciting.